The Bronx is burning

TÍTULO ORIGINAL: The Bronx is burning, 2007. 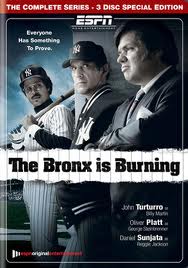 “In the year 1977, Major league Baseball has officially inaugurated the free agent market. A baseball player named Reggie Jackson came to New York to sign a contract with the ball club called the “Yankees”. But, what Jackson does not know that he will soon bring controversy to the club, by saying that he’s the “Straw that stirs the drink”, causing his fellow teammates especially, Thurman Munson to not like him. Plus, manager Billy Martin and owner George Steinbrenner also have their won private arguments about Jackson and the team. Meanwhile, other things are happening in New York as a killer using a .44 magnum and calling himself as “The Son Of Sam” is lurking around the city, and the infamous blackout.” (Imdb)